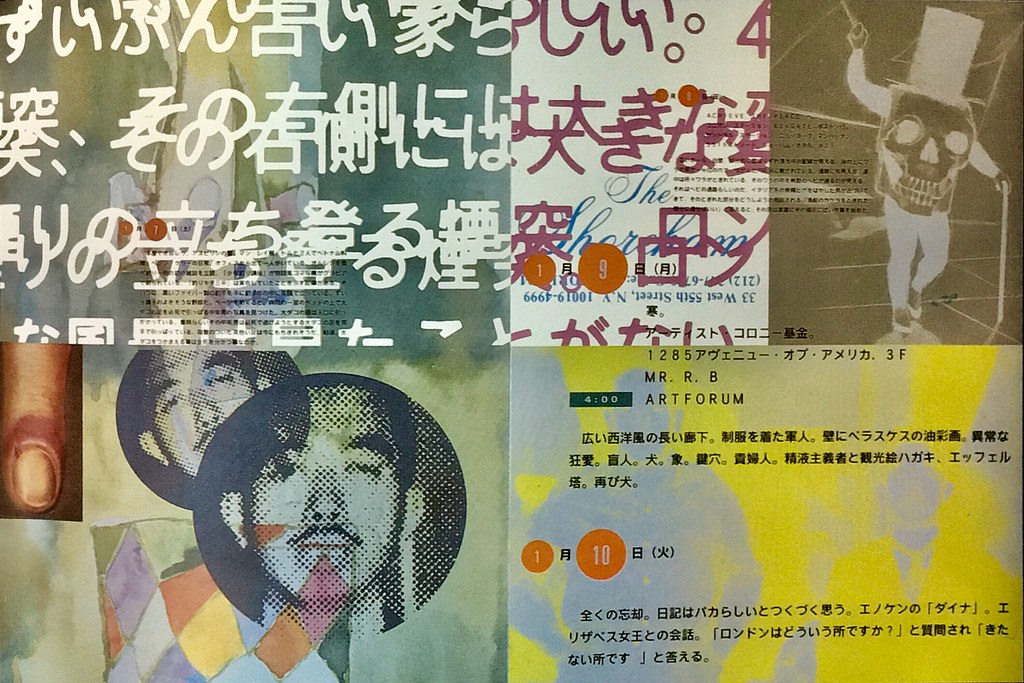 It is rare for artists to surrender control over the way in which their work is presented, and the traditional art book tends, as a result, to be a respectful, visually subdued affair. With his most recent book, Tokyo Salamander: American Dream Diary 1989 (Art Random monograph, Kyoto Shoin, 1993) Shinro Ohtake returns to the American travel experiences that had given shape to several previous publications. This time, however, he left the formulation and assembly of the book entirely in the hands of London designer Vaughan Oliver. In the last decade, Oliver has established an international reputation as one of the most original designers of music graphics, and he had previously used work by Ohtake on record covers and calendars for the record label 4AD.

Ohtake supplied Oliver with the original Japanese text and translation of his dream diary, assorted ephemera collected in America and elsewhere, a set of charcoal drawings, and transparencies of spreads from his sketchbooks, paintings and watercolours – few of them inspired by America or his dreams. He stipulated only the page size of the book, that it should be 64 pages long plus cover, and that his text should be used in its entirety. Strict legibility did not have to be preserved, because dreams in memory are fragmentary and blurred. Oliver was free to introduce imagery of his own, to use English words, and to treat Ohtake’s art works as raw material in the construction of a new object; he could extract details, overlay pictures with elements, or change the colours reprographically, as he saw fit. The book as printed – French folded, in thickly varnished four-colour, plus silver – has a less precious, slightly more ephemeral feel than many of Ohtake’s other books.

Their shared aim was to give the book a dreamlike quality. At the same time, Oliver was wary of treating every spread as a gatefold record sleeve and decided – as a way of controlling a flow of images that could quickly degenerate into chaos – to divide the page into four equal-sized units.

Within this framework associations are loose and subjective and not every page necessarily relates to a dream. The spread above provides a good example of the book’s inspired fusion of elements and fortuitous encounters. On the day the Emperor Hirohito died (8 January 1989) Ohtake arrived in New York. Oliver’s interpretation is based on a New York Times photograph supplied by Ohtake of Hirohito and General MacArthur, commander of the occupation forces in Japan. The thumb pointing downwards, a motif Oliver has used elsewhere functions, like Ohtake’s drawing of a top-hatted skull, as a memento mori. In Ohtake’s dream, hundreds of snakes crawl through torn-up bales of straw. As a commentary on Nippon-American relations, it is nothing if not oblique. Read ‘Books in freefall’ in Eye 10