A week before a one-day event at the St Bride Foundation in London, a survey of recent activities which explore the enduring relevance of letterpress. 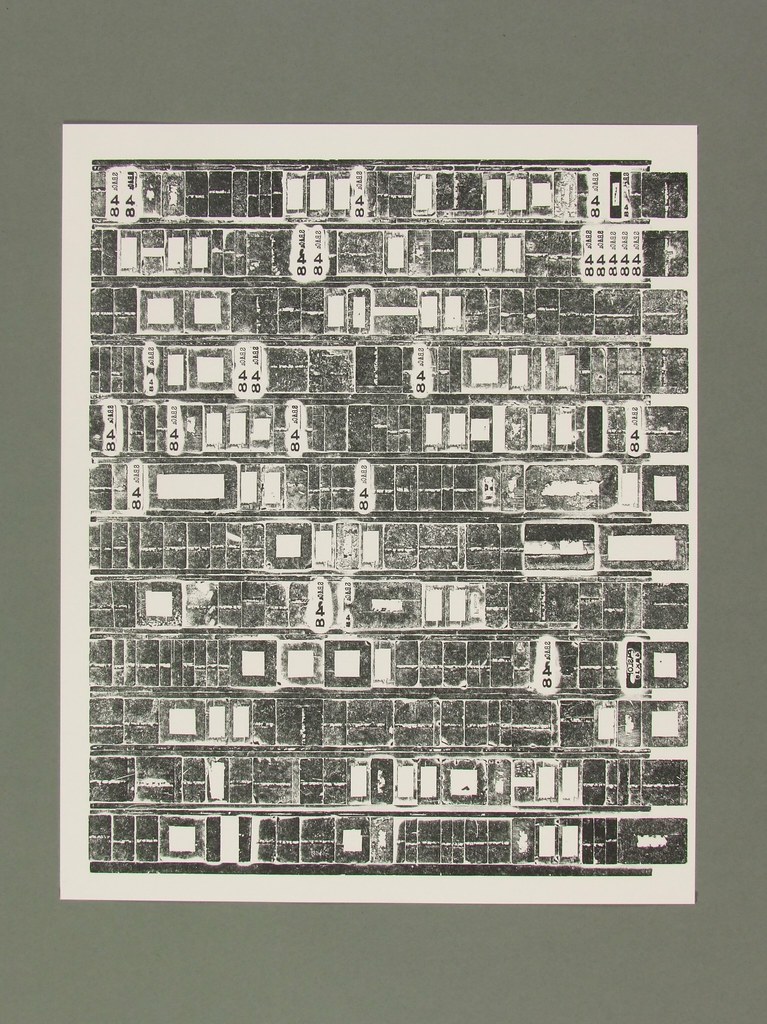 Letterpress is everywhere. First, it was a boutique fashion of designer-types. Now it’s in John Lewis, writes Catherine Dixon.

Featuring regularly in the lifestyle spreads of magazines, letterpress is a resonant feature of a wider revival in a hands-on approach to production well in evidenced in the growing numbers of events and fairs such ‘Handmade & bound’ and ‘Pick me up’ all providing opportunities for people to sell their wares. Yet, while the coffee table collections of letterpress works seem firmly routed in a retro-nostalgia groove, this movement is very much being driven forwards by younger designers and students. This is a generation for whom the computer often represents their worlds of both work and play. This is also a generation of designers being called to reconsider craft, be it in the digital making of new open-source tools, or as a response to the tactile losses of e-publishing, opening up spaces for re-imagining the objectivity of texts and for exploring processes inky, mechanical and, for them, often mysterious.

Given these changing perspectives, perhaps, more than any other time in recent history, to teach letterpress in the context of the education of a designer, does not represent what it did. Intention around the use of letterpress in educational contexts is, in any case, often poorly articulated. To step then beyond the limited scope of a dialogue too often looping around the feel-good factor of working with slow old letterpress in a fast new world, a collaborative project named 6x6 driven forward by the University of Brighton and the London College of Communication has set out to map a range of positions now being taken to better represent the reality of the current situation, and from which to then reflect upon the issues arising and prompt more detailed and critical discussions in the future. An open brief invited three staff and three students each from six institutions with active letterpress workshops to explore their geographical and contextual relationships to the letterpress process through work and texts. 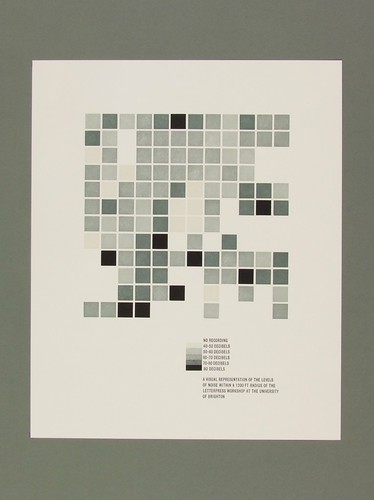 Works were printed in editions of 200, which combined with a litho text section will form the basis for a forthcoming exhibition and a publication.

Importantly, purposefulness in engaging with letterpress, is not simply being explored in terms of process, but also in relation to content. It can seem that to print something letterpress is now end-enough in itself – the words themselves of less importance than the evidence of the process, often textural or uneven inking and a deep impression, all evidence in fact of ‘bad’ printing to the trained trade printer.

Reassuringly there are those for whom the text does still matter. At TYPO London earlier this month, designer Anthony Burrill described his approach to work as one which focussed on a simplicity of message, yet a richness in execution. For the past decade Burrill has been working with Adams of Rye, producing his series of now archetypal statement letterpress posters. 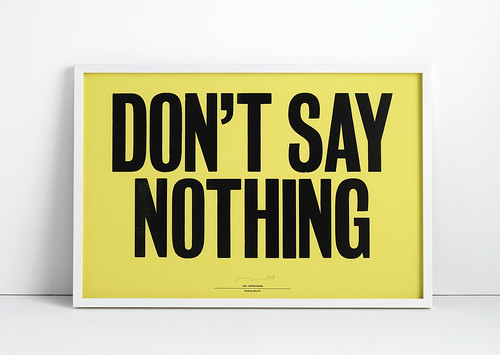 And while some humorous online self-stalking by Burrill showed these posters as a regular set fixture of the stylist, his choice of words is far from superficial. In describing a subsequent project, a workshop with partner Mesa&Cadeira in São Paulo which explored the idea of saying the most with least (the poster outcomes exhibited in London’s Kemistry Gallery , Burrill’s preoccupation with what he communicates and his precision over the words he uses becomes clear.

Spike Island in Bristol, an international centre for contemporary art and design, has recently featured the work of letterpress printer and typography teacher Desmond Jeffery in the exhibition ‘Type and Space’. In addition to the forward thinking in terms of layout manifest in his ‘jobbing’ works and collaborations, curators Sally Jeffery, Jono Lewarne and Charlotte Hetherington also celebrate those projects where the words printed resonate with Jeffery at a more personal level, representing in fact a marriage of his political and professional beliefs.

This poster for Federico Cimatti’s imprint called Prensa La Libertad reads ‘Be aware of your power. Tomorrow is a transformative experience.’ 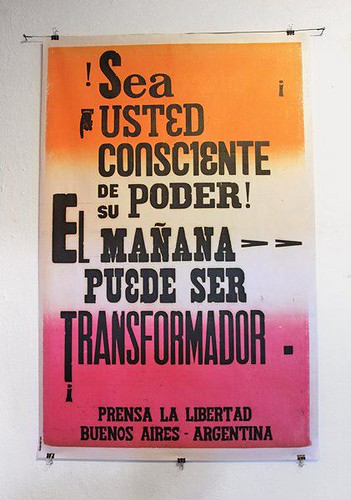 In Buenos Aires a printing press similarly enables designer Federico Cimatti to produce the usual stationery fodder to run his business but more importantly for him, to engage with his community at a political level, producing campaign posters and flyers under his imprint of Prensa La Libertad.

And in Barcelona co-operative L’Automatica have gone a step further than most in buying a letterpress printshop going out of business. In addition to the machinery and space they are maintaining the previous owner in his job – so he can continue to print and they can receive a proper training. This small not-for-profit collective can then run their small run books in a high-quality and cost-effective way, and also use their press to work towards the political changes they hope for in economically beleaguered Spain. 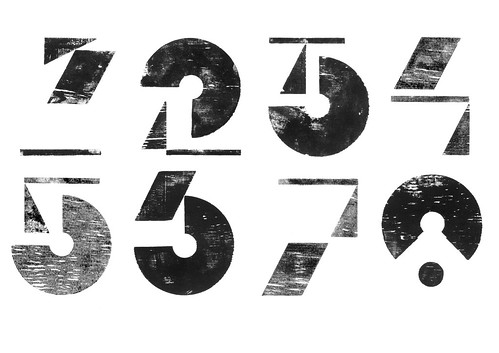 Purposefulness in design using letterpress was engagingly demonstrated at a congress in Valencia this Summer entitled Más allá de la tinta (Beyond ink). Tomato designer Dylan Kendle showed how he used letterpress not so much as the means to an end in his work, rather as a means to a beginning – using the immediacy and modularity of wooden type as a springboard from which to develop projects, many of which he actually resolved digitally. 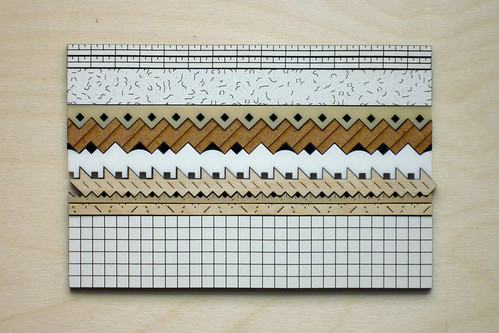 Illustrator Peter Nencini’s Make Do Type system was borne in his drawing hand, yet applied through print is now being worked in embroidery for commissioned furniture, both these examples amply illuminating designer and printer Ian Gabb’s argument that letterpress should be defended, not exclusively, but rather as ‘part of a rich and pluralistic graphic culture.’

Drawing these separate explorations of purposefulness together is a one day event in London at St Bride Foundation entitled, Letterpress: something to say at which representatives from the 6x6 collaboration will be speaking, alongside Anthony Burrill, the curators of the ‘Type and space’ show, L’automatica, Dylan Kendle, Peter Nencini and Ian Gabb. There to provide some context will also be trained compositor and designer Thomas Gravemaker , Workshop and 6x6 collaborator Rose Gridneff and designer and writer Catherine Dixon.