How Punch magazine turned table talk into cartoons and typography 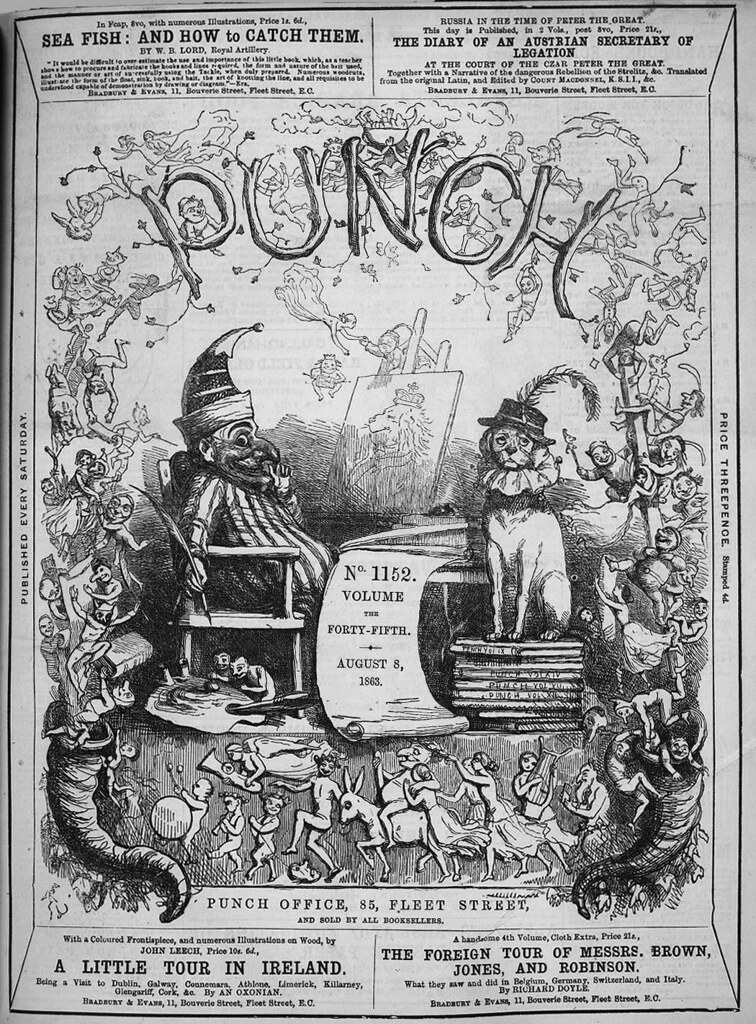 The British Library have just published a book that explores the inner world of Victorian comic magazine Punch. The Punch Brotherhood, by Patrick Leary, examines the importance of oral culture (or ‘table talk’) in shaping nineteenth-century print culture.

Leary writes in the introduction: ‘Every Wednesday evening the staff would gather round the table at the publishers’ offices in Bouverie Street and over a sumptuous dinner, many glasses of champagne, and the inevitable cigars, proceed to fire off bad puns, reminisce, trade gossip about all and sundry, tell dirty jokes, pontificate and argue about matters sexual, political and religious, and – in the midst of this conversational melee – settle down at last to the main business of the evening: coming up with ideas for the full-page cartoon that would be the centerpiece of the next week’s issue of Punch.’

Punch magazine cover (8 August 1863), illustration by Richard Doyle. Mr. Punch creating the Large Cut himself (the main cartoon in Punch), using his dog Toby as a model for the British Lion, with a crown upon its head. Image: British Library Board.

Below: ‘A Leap in the Dark’, Punch (3 August 1867). This cut shows Disraeli as a runaway horse carrying Britannia into the thicket as Britannia covers her eyes – Gladstone, Bright and other MPs hang back, looking on. Image: British Library Board. 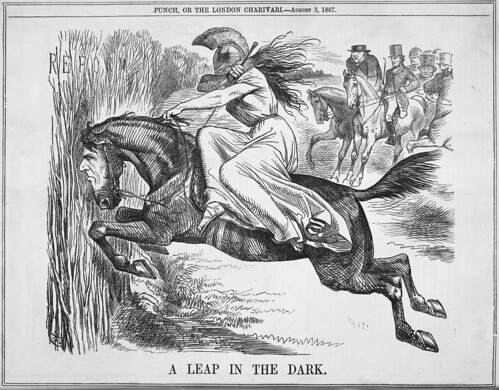 In Eye 48 (back issues available from the Eye shop) we featured a piece about Punch’s typography. In ‘Punch cuts’, Nick Shinn argued the case for appreciating everyday Victorian typography as innovative, intelligent and utterly of its time: ‘The page layout of Punch magazine, a work of precise, elegant restraint, persisted from the magazine’s founding in 1841 for almost a hundred years, the only change being an increase in text size in the 1890s. Very classic, practically indestructible and perfectly Modern’ 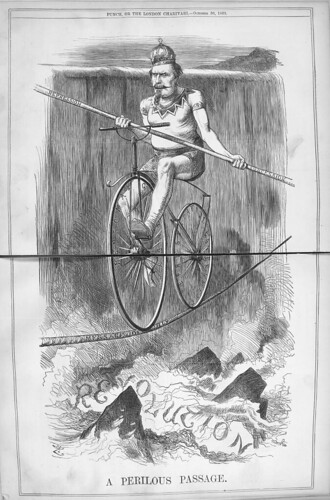 Above: ‘A Perilous Passage’, Punch (30 October 1869). In seeking the Punchiest and most topical cut, the writers constantly strove to combine two ideas. The week that the French tightrope-walker Blondin appeared at the Crystal Palace, Louis Napoleon of France was shown making his way across a rope on a bicycle over an abyss of ‘Revolution’. Image: British Library Board

Below: ‘The Parliamentary Python’, Punch (1 March 1862). Punch Readers frequently sent in suggestions for cuts that coupled political and non-political events and on very rare occasions their ideas were actually adopted. The story behind this image is that in 1862 John Leech brought to one dinner meeting a sketch by a lady of a Parliamentary python hatching bills, a reference to the keen public excitement about the fate of the pregnant python at the Zoological Gardens. Image: British Library Board. 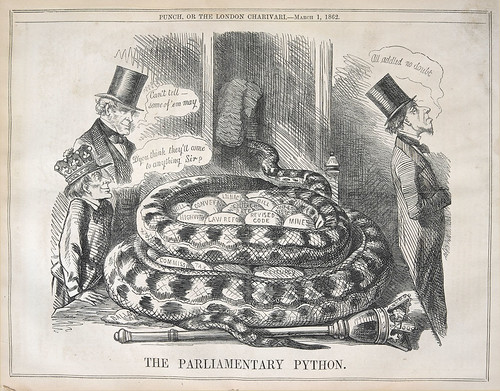 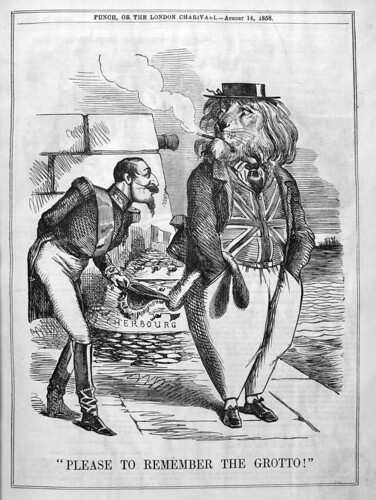 Above: ‘Please to Remember the Grotto’, Punch (14 August 1858). This obscure cartoon shows Louis Napoleon at Cherbourg, tipping his hat to the British Lion (who is dressed in holiday clothes) and saying, ‘Please to remember the grotto!’ It satirizes the French emperor’s childish pride in what he has built, while depicting him as making an annoyingly intrusive request for trust from a wary British Lion who keeps his hands firmly in his trouser pockets. Image: British Library Board.

The summer issue, 76, out now, is a music special – full contents here, and you can see a selection of visual details on Eye Before You Buy on Issuu.