Is foil the new black? Only when it’s green

A British firm is determined to help designers understand the foiling process, from start to shiny finish. By Martin Colyer 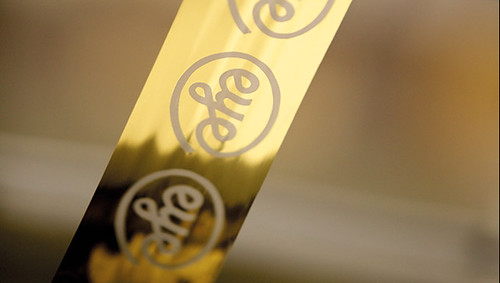 The artisan monk working on his illuminated manuscript in the early Middle Ages understood what the sheet of finely beaten gold leaf sitting by his lectern would bring to his beautifully wrought initial letter. It would lift the work up with its brilliance, impressing all who saw it, imparting beauty and significance to the project. We can be sure that as he laboured, our monk gave no consideration to the ecological soundness of his process. But in today’s climate, the environmental impact of such processes in printing, paper and inks have become of paramount importance. The concerns of the past decade have meant that every self-respecting designer works with printers who take care over their supply chain’s eco-credentials. Indeed, local authorities, the third sector and other potential clients will often insist on working only with suppliers that come up to the mark ecologically.

Information on the paper industry’s sustainability, reforestation and recycling is well known, but foiling remains a mystery to many. It is a niche finishing process, and it involves metals and polymers, which has led to a perceived problem with its ecological soundness.

Now, however, one of Europe’s largest foil suppliers has grasped the nettle and become the first British Printing Industries Federation accredited company with the Zero Foil 2 Landfill certification. Foilco, a family-owned firm based in Warrington, Cheshire, has ensured that all parts of its foiling operation are 100 per cent recyclable. The hot stamping method uses a die (usually brass) to stamp an extremely thin layer of aluminium foil (from a waxed polyester carrier roll) onto the board, such as a magazine cover or packaging. That foil coating is so thin that it dissipates in the re-pulping process, making that board fully recyclable. The used carrier rolls can either be recycled by the printer or alternatively parcelled up in Foilco boxes and collected by the company for recycling. The polyester rolls are incinerated using a process that captures energy for supply to the National Grid. Ash left at the end is used in the cement industry.

With their eco-credentials firmly established, Foilco is now intensively courting designers and art directors to show them foil’s countless options. To this end, they have changed their identity design (courtesy of Studio DBD) and adopted a custom typeface: Pamela, by Rick Banks. They are engaging with both students (running workshops in toner foiling, for instance) and professionals, to open their eyes to the ways that foil can add not only lustre but more indefinable qualities to a wide variety of projects. It is not just about gold, silver or pearl – or even to those of us old enough to remember, the holograms of the 1980s – foil can also print a dense black that conventional ink can only hint at, or overlay conventional printing with transparent ‘effect’ layers. Since foil can be used for just a logo, or a small detail on a cover, printers often run the foil as a thin band.

Foiled expectations
Foilco’s current ambition is to transcend outdated perceptions of foil, moving them beyond visions of mass-market manufacturers printing hundreds of thousands of chocolate boxes, birthday cards and lottery tickets. Now, with both digital and conventional printing allowing for shorter runs and more customisation, things have changed. Some printers have brought foiling in-house by buying specialist foiling companies, and there has been an explosion in the variety of foils being manufactured. Look at a sample book and prepare to be impressed by the variety of finishes and application techniques, from transparency to etching and embossing.

Rolls of foil and (top) the thin band of foil on its carrier roll after transferring the Eye logo during the foiling process at Pureprint, Uckfield. Photographs by Philip Sayer, 2019. 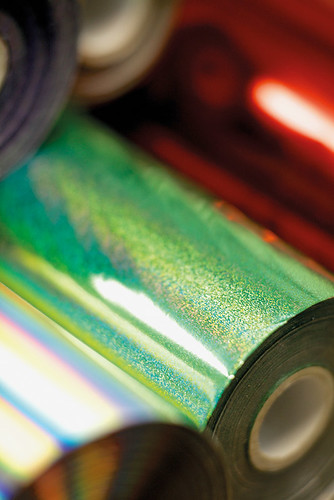 Fraser Muggeridge (see Eye 75) has long been an enthusiastic user of foiling. Often operating at the more experimental end of graphic design, Muggeridge once printed invitations using foil but throwing away the resulting cards and sending out the foil carrier instead, encased in plastic envelopes. Talking of his love of foil at a talk for It’s Nice That, Muggeridge said that it is always his ambition ‘to find something new, something that’s not been used before’.

Riot of clashing rainbows
On one job for the Focal Point Gallery (a small Southend-on-Sea art space), Muggeridge’s instruction to the printers was to ‘use up any old foil rolls that they had lying around’, leading to a randomised, unique set of exhibition invitations. This inspired move was a perfect fit for the hand-crafted house style which his studio had set for the gallery. For Fedrigoni’s 16/3 (2016-17), a promotional book project that showcased the work of eight different designers – each given carte blanche to create a sixteen-page section – Muggeridge gathered up all of the dies that his studio had made for different projects over the past ten years. He then planned them up like a jigsaw, making a technically challenging but rather beautiful print work, printed as an A1 poster as well as a sixteen-page section of 16/3. The vibrant, colour-banded foil bound the myriad images and blocks of type together.

So it seems that the perception of foils as a little, well, naff can be firmly consigned to the recycling bin. Foils can be whatever your creativity wants them to be, from a dusting of icing on the cake to a psychedelic riot of clashing and dancing rainbows. I’m not necessarily saying that foil is the new black. But maybe it is the new silver. And gold. Oh, and that verdigris shading into rubine red, too.