Hidden away in an unmarked three-acre junkyard in the scruffy southern outskirts of Las Vegas is the Boneyard, an astonishing elephants’ graveyard of more than 60 years of typography from the heart of America’s neon capital. Here in this weed-blown lot lie the discarded carcasses of America’s golden age of signage.

You might not have heard of it but you would almost certainly recognise it. The stylish chaos of redundant design has been a perennial favourite for fashion shoots and pop videos, something not lost on its owners: access to, and photography of it are tightly controlled and expensive.

All images taken by Luke Pendrell at the Neon Boneyard in Las Vegas, US. 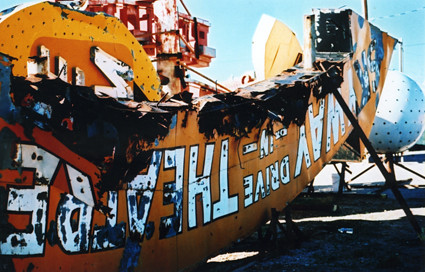 The site is the open-air storage area of the locally based Neon Museum which aims to ‘collect, preserve, study and exhibit neon signs and associated artefacts’. Some signs have been restored by the museum and relocated as open-air exhibits in and around the Fremont Street area of the city. But the majority languish out here in the weeds, awaiting repair.

The museum is a strange mixture of decay and salvage. Derelict steel type of all imaginable shapes, colours and sizes lies jumbled and rusting among such marvels as a twenty-foot-tall steel pool player, a giant Aladdin’s lamp and the charred remnants of an enormous leprechaun. 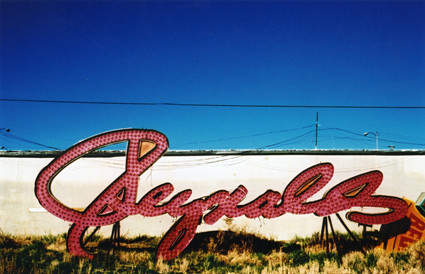 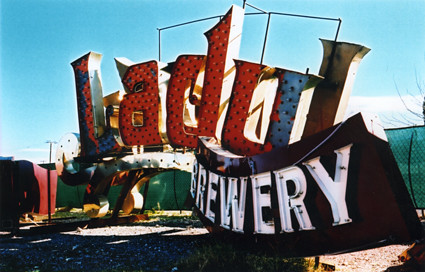 Faded paint peels in the sun, the glass from hundreds of broken light bulbs crunches underfoot and once great Rat Pack-era icons such as The Sahara now jostle for prominence alongside the relative obscurity of Karl’s CB Sales and Joe’s Anchor Inn. 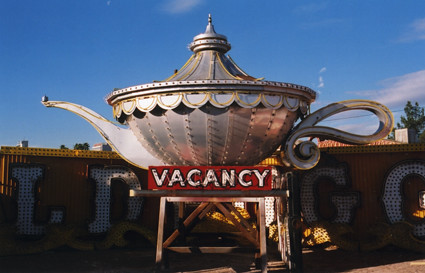 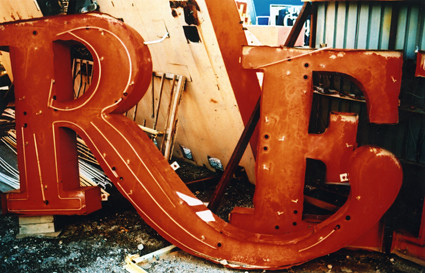 A walk down the length of the strip to downtown is a reminder that this is the end of the era. While some of the vast old monumental signs such as The Frontier and The Stardust remain, many of the classic neon signs are falling into disrepair. It can only be a matter of time before the relentless reinvention of Las Vegas overtakes them and they are dismantled for newer attractions. Nostalgia may be a part of the Las Vegas brand but sentimentality is not. Increasingly, neon is maintained only within the confines of what the museum calls the Fremont Street Experience. 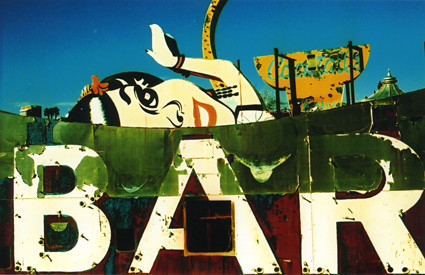 As the old neon and bulb signs are replaced with new LCD screens, and the gaudy washes of colour give way to the ersatz classicism of the Bellagio and the Venetian, more and more of what we perceive as Las Vegas will be found out here on the peripheries, quietly rusting.